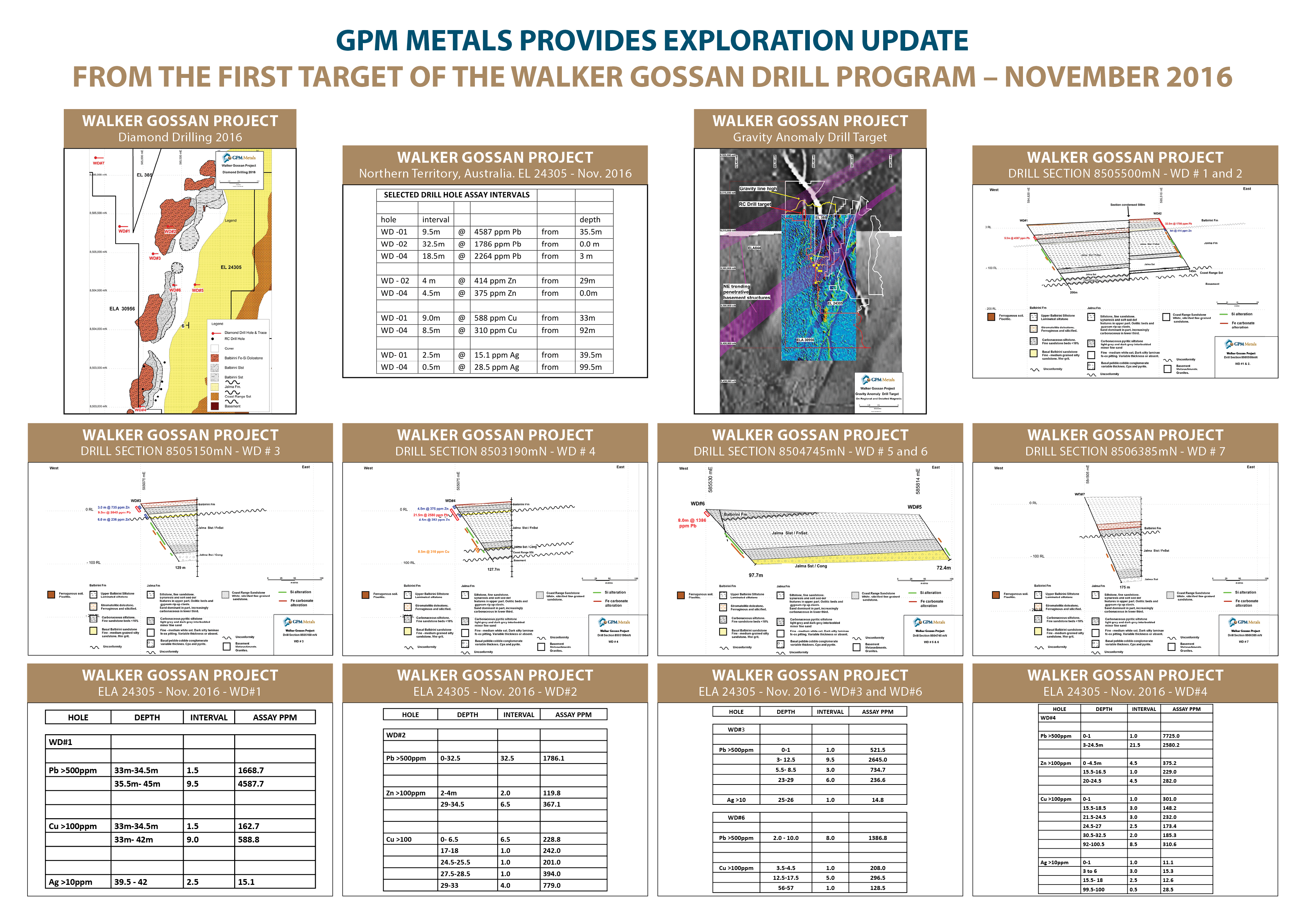 GPM Metals 100% owned Australian subsidiary (DPG) is the operator of the project; and has a right to earn in 51% of project during Stage 1 of Joint Venture Agreement, subject to certain conditions as outlined in Terms of Rio Tinto property agreement below.

The Walker Gossan has had very limited exploration work undertaken since the ground was staked by Conzinc Riotinto Australia (predecessor of Rio Tinto) in 1972 due to the implementation of the Aboriginal Land Rights Act of 1976 and opposition to minerals exploration by the Traditional Landowners.

Subsequent political and social developments in Australia, and the progressive outlook of this generation of indigenous leaders, has resulted in a more open stance to development of mineral resources on Aboriginal Land. 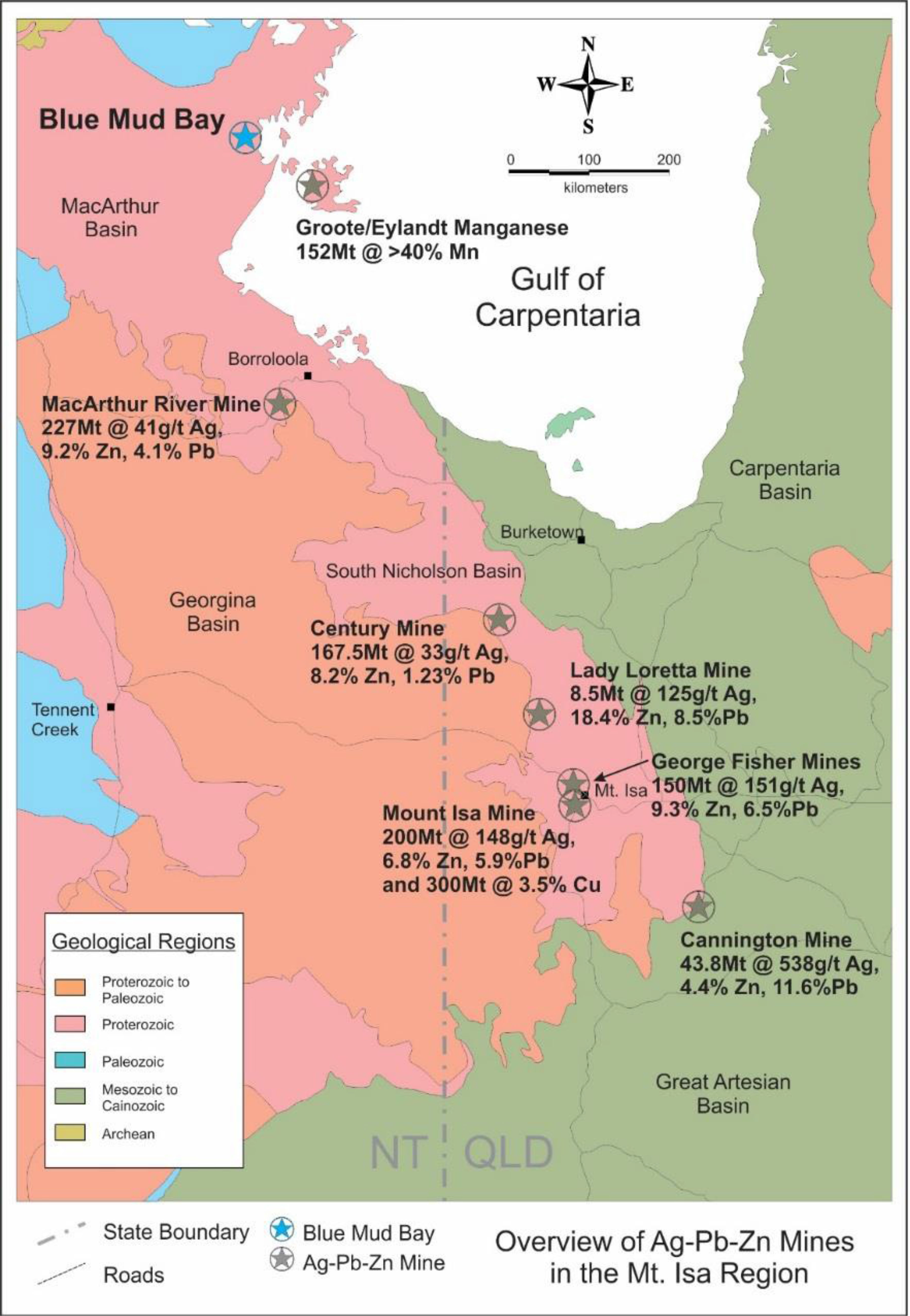 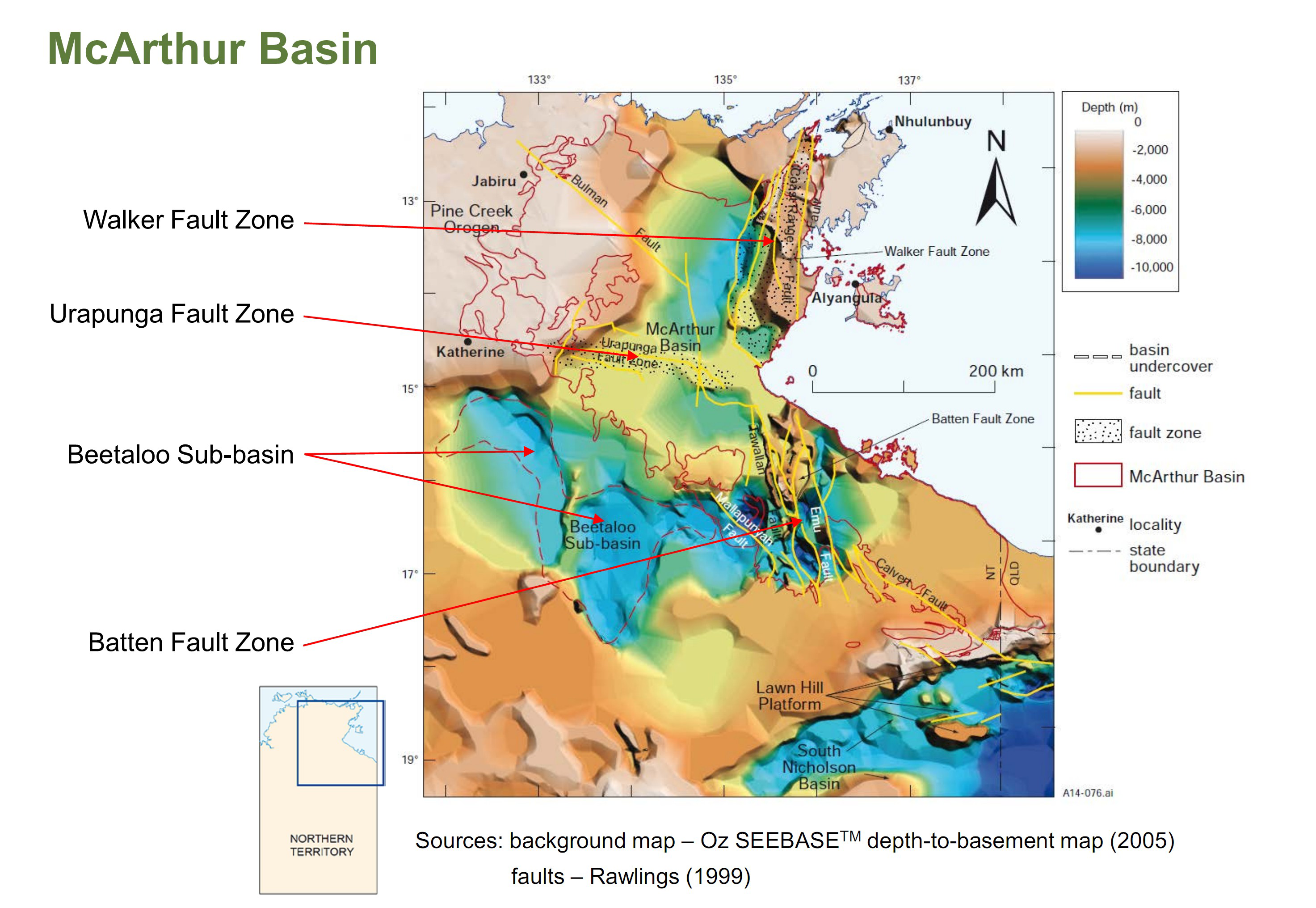 The property had been under tenement application by Rio Tinto since the time of discovery, and GPM Metals is pleased to announce that approval for EL 24305 to proceed was granted;  enabling  the Company to proceed with exploration on key areas of the Walker Gossan Project (“WGP”),  Northern Territory, Australia .

The Walker Gossan is the only known major gossan in the district that has not been drill tested. Most other large gossans within the district contain world class deposits.

In geological terms, this Walker Gossan occurs within a major Proterozoic base metal belt which contains a number of large, high grade Ag, Pb, Zn, Cu, deposits with a history of production. 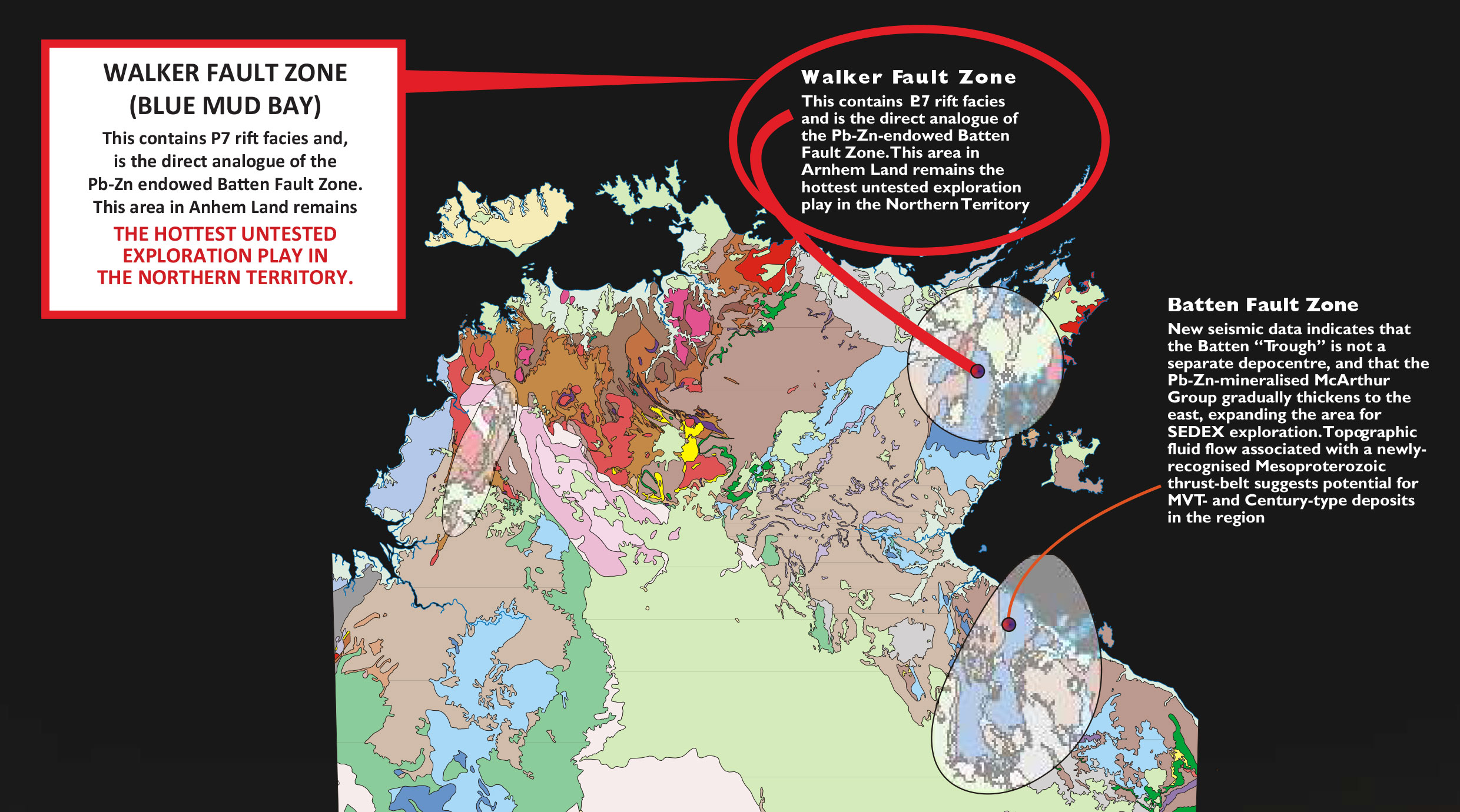 Discovery by CRA in 1970 4km gossan / with highly anomalous lead values at surface. Tenements staked in 1972 but the applications were not granted due to a change of federal government policy regarding Aboriginal land rights in the Northern Territory.

The federal government subsequently froze all applications for mining and exploration on aboriginal reserves.

Access to these properties by resource companies was not permitted, and no further exploration work has been carried out on this property since 1972.

By the late 1990’s in what was known as the Reconciliation Policy, various mining companies began to finalize land use agreements with Traditional Land Owners and their Land Councils.

In 2009, DPG Resources ( a private company) was formed and funded with $1,000.000.00, to acquire The Walker Gossan asset from Rio Tinto. This property was well known within the Australian geologist’s community.

Greg Duncan P.geo, a seed shareholder of DPG commenced negotiations with Rio Tinto in 2009. Mr. Duncan specializes in stakeholder relations and has a proven record of successful negotiations for Indigenous Access Agreements with Traditional Land Owners (TLO) in The Northern Territory and Queensland.

V.GPM and DPG had shareholders and management in common, and a DPG acquisition was approved and undertaken in August 2013, and the company treasuries were combined for a balance of approximately $5,000,000.00

In July of 2015 approval for EL 24305 to proceed to grant has been obtained;  enabling  the Company to proceed with exploration on key areas of the Walker Gossan.

To date, the Company has flown an airborne magnetics program of 50m line space over the target area as well as an IP geophysical survey, geological mapping and completed the initial ‘first pass’ reconnaissance soil sampling  of the primary area of historical interest at the southern portion on EL 24305. The target area on EL 24305 was identified in 1972 and had been held under continual exploration licence application (ELA) by Rio Tinto since that time.

The exploration target is a large, strata bound, sediment hosted lead – zinc deposit. Initial soil and rock sampling results have demonstrated a Pb-Zn mineralization over a 3km length at surface.

Soil results have defined a continuous 3km X 500m corridor of anomalous lead, including a 1400m long contour of plus 500ppm Pb with a maximum of 2800ppm. Rock chips have confirmed the soil results with values as high as 1.8% lead.

The initial assessment of the results of the IP survey confirm elevated chargeability associated with the targeted mineralized zone. These results are currently being interpreted, compiled and integrated into the Company data base to design a drilling program for 2016.

The samples comprised ~ 200g of minus 2mm sieved B horizon soils which were submitted to ALS Laboratories for multi element analysis by Method ME-ICP41. This involved an aqua regia digest with analysis by inductively coupled plasma – atomic emission spectroscopy.

The highest lead assay was 1.8% Pb in sample 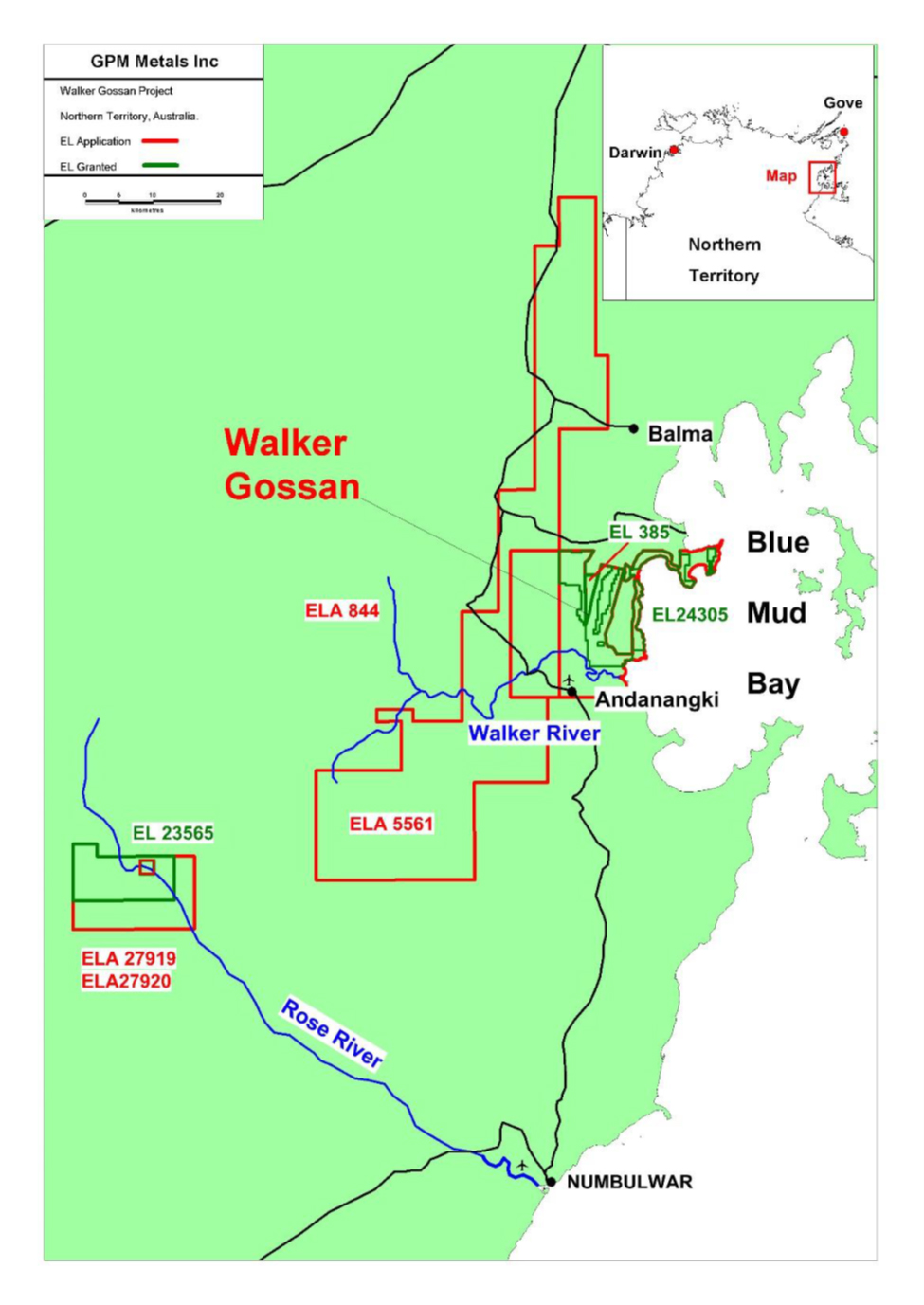 GPM may increase its interest to 75% by completing a Feasibility study with 3 years of completing Stage One.

Rio Tinto may elect to contribute pursuant to its participating share, not contribute and be diluted or convert its interest into a Net Smelter Royalty (2.5%).

There are rights of first refusal on purchase and sale of interest for both parties at fair market value.

GPM will be responsible for all negotiations with the Northern Land Council for consent to issue the exploration licence applications and work programs to be conducted by GPM under its sole rights or as operator. 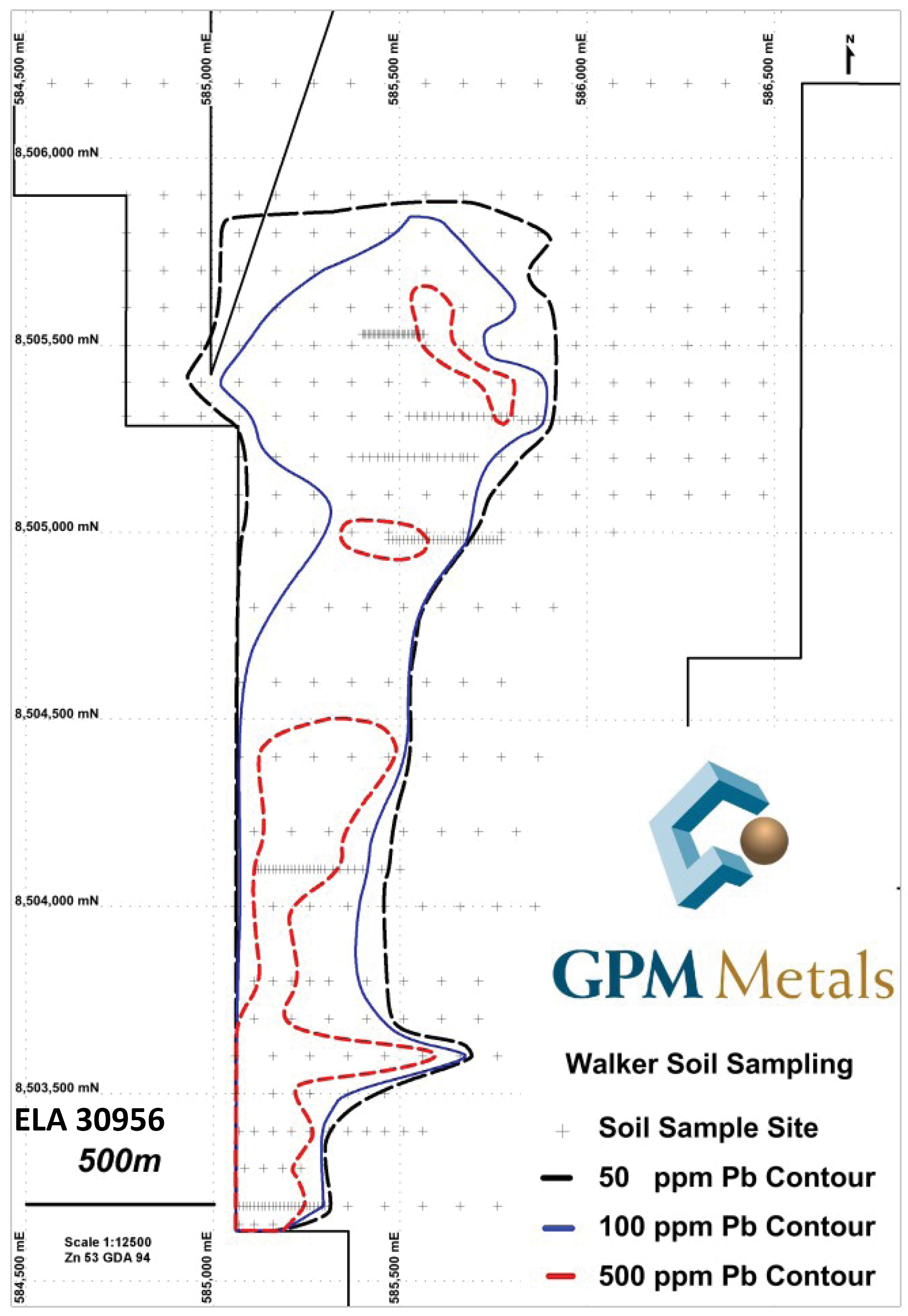 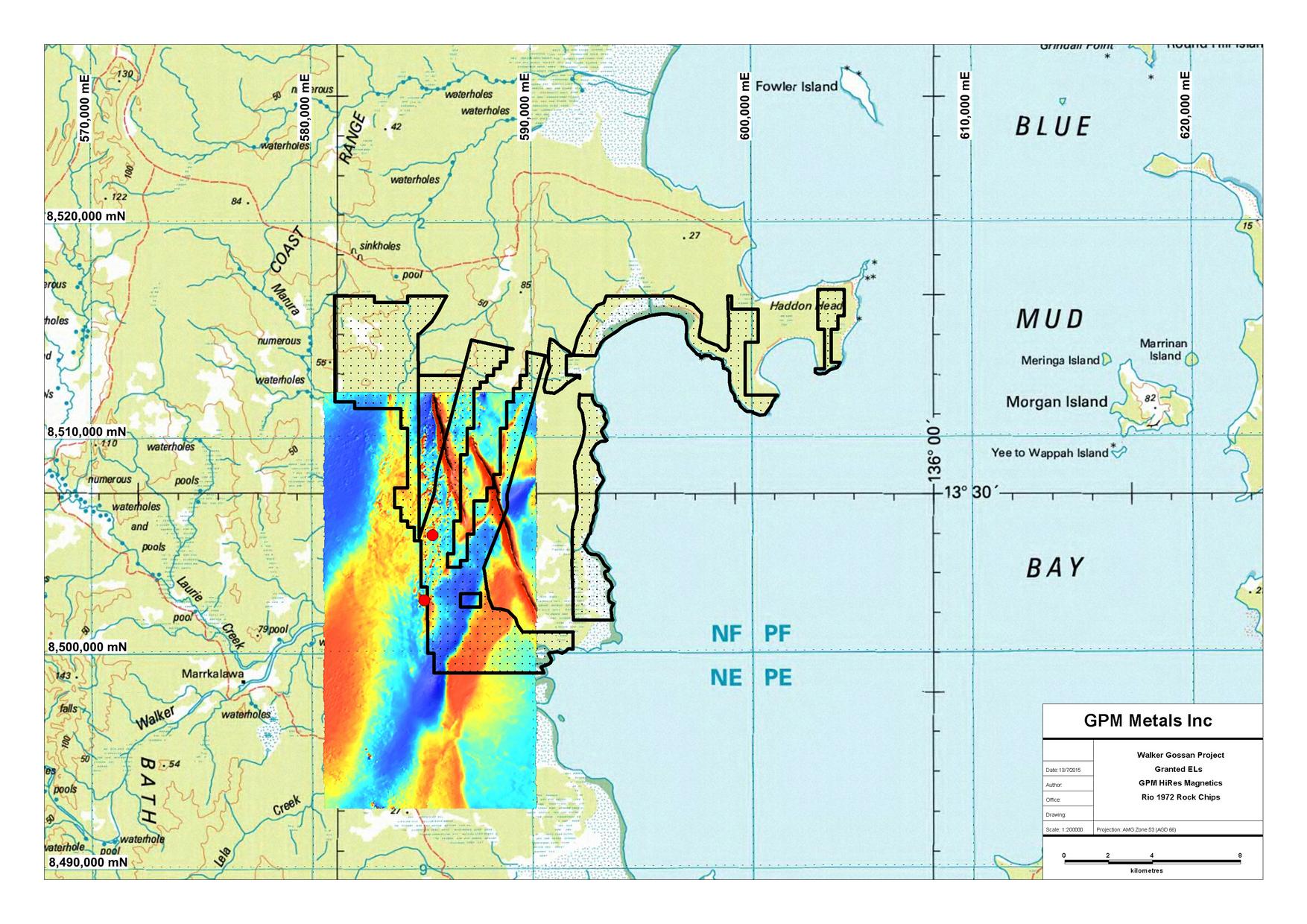